Today is the first full day of being a holiday foster.  Yayla is really a good girl, our cat it just a nitwit, but honestly I think Layla would probably try to kill him anyway.

He ended up on the china cabinet again last night.  I plucked him down to put him in the utility room.  I had his food, water and a little bed in there along with the litter.  This morning he had eaten the wet food - only.  He was hunkered down beside the water heater.  It is a tight little space where I know he feels safe, but if the water heater would come on, that may be a different story!

I got him out, and he is lurking somewhere.  Last I saw him he was on the out side of the baby gate that is blocking the stairs.  Layla seems to know she isn't allowed in that hallway without someone with her. 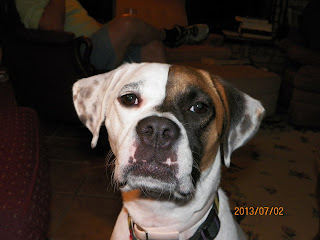 This is Layla.  That is a little spot above her right eye that is enlongated to look like an eyebrow.   I think it gives her quite a look.  And those aren't her teeth, they are just white spots on her lip.  She is really a sweetheart.  She knows "House" which means to get into her crate.  That's where she slept all night with no problems at all.

I wish I had slept as well.  I think I must have gotten a cold from someone, but I don't know who.  That bothered me all night, and I was either too hot or too cold. 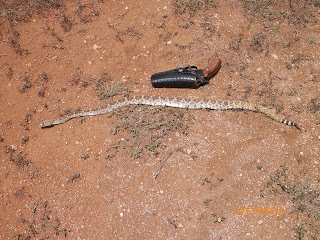 This is the rattlesnake we "harvested" from the SSB.  It was while taking THIS picture I realized that snake was not dead.  The head is lifting from the ground.  After a bit, it turned 90 degrees to where I was standing. Needless to say, I was no longer standing there.  I had retreated to the house to tell G that his snake wasn't dead.  This is several hours after it was "killed" and G had used a pair of gloves to pull it out from the deck.   Gotta watch those snakes.  Their nerves take a long time to die!
Posted by Grandma K at 1:44 PM

I love how Layla's face is half brown. Such a straight line of color down her face.

That snake would have scared me to death. What did G say when you told him it was still alive (or nerve movement) after he had had his hands on it?

Love this baby. The eyebrow is priceless!