Cross your fingers!  The guy came out on Monday, just as I requested on email.  He replaced both controllers and both heating elements.  As he was doing a final run of the machine, he decided the top drawer was making a noise.  My heart sank.  More time with no dishwasher.  I was in luck - he had the plastic (gasp) parts that are with that drawer (it will take more time to explain what they do than I want to spend here).

Anyway - it works - at least each drawer individually.  It's quiet.  He does clean so nicely.  BUT I haven't had a chance to run both drawers at the same time.

I don't think we will really love this machine.  It is small really.  My dinner plates are too big to fit the way they are supposed to, but apparently this is a problem for all people.  The tech showed me what to do - turn the plates around.  I did - and it works,

Guess I will contact Discover and allow payment to go through in a couple of days.
Posted by Grandma K at 10:26 AM 5 comments: Links to this post

This and that and pictures

Here I sit waiting for the repairman of the lemon dishwasher.  I am really hoping he DOESN'T have the controller is able to fix it.  I don't like it.  It won't hold all the dishes I want it to hold, and from reading various reviews, it will break again.  And we will begin all this over again.  I want this thing gone.

But to more fun things.  This past week was our high school's homecoming.  Katie was kept busy with all the different "days" they had as spirit days.

Saturday was the dance, but the water polo team had two games.  The coach managed to get them at 12 and 12:40 so they could get back home to primp.  Those were some tired girls however.  The whole team didn't show, so they only had one sub.  Basically they were all in the water an hour and a half or more playing really strenuous games. 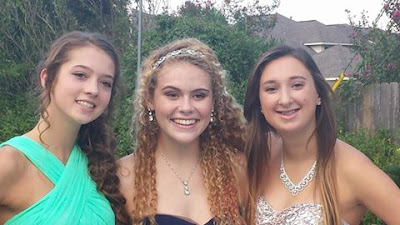 The other four grands, while each being cute as can be didn't have something special going on.  The youngest girl has a birthday/birthday party next week.  Sooooooo.
Posted by Grandma K at 12:47 PM 2 comments: Links to this post

And the beat goes on


Remember the new dishwasher.  That supposed top line, whiz bang thing.  Well it STILL has washed 4 plates, a pot and assorted glass and silverware.  That's it.  Only now it won't drain the water that resides in both drawers.

The technician came out on the 11th (perhaps that's what was bad).  Stayed for over two hours.  Took the control devices from the drawers saying it hoped they would be over nighted. They. Were. Not.

So on the 15th I sent a complaint to what they laughingly refer to as Customer Service.  The response from them was to send them the serial number and a copy of the sales invoice.  Of course, we weren't home and I didn't have access to a scanner and especially those requested items.

I sent those back to them three days ago.  Nothing.

Two days ago, I filed a dispute with Discover (it pays to use Discover on items like this).  So I have a temporary credit for this bill.  IF the piece of junk worked, I would pay for it.  Since when I called the dealer he dismissed me with the referral to the company, perhaps this will get his attention.  I don't feel I owe him anything more.  He was aware I had used the thing one day.  This action may take about 30 days for it to come to completion.

Today I used their on-line request for service.  Wanna take bets on what will happen????

Posted by Grandma K at 2:20 PM 4 comments: Links to this post

That is a saying here in Texas.  I'm not sure any other area uses it, but it is quite descriptive.  And it makes sense since we do have so many poisonous snakes around here.

Anyway, that's how I am feeling just about now.  And here goes with another moan/groan post.

We had a very nice dishwasher that was about 15 years old, but worked well.  But it had a design flaw.  The handle.  It was plastic connected to metal.  There was quite a force exerted on that handle when you pulled it to open the door of the dishwasher.

One of our hunters has become our appliance repair.  That is his business, but we didn't use him before because he is located on the other side of Houston.  He assured us that it didn't matter.  He didn't mind the travel.

So we called him to repair the dishwasher at least twice.  The last time, he said he didn't think he could fix it again.  Of course the parts were discontinued!  He spent quite a bit of time fashioning a "fix."

So the Lord and Master around this house gave the edict that it was time for a new model.  I cringed a bit because I really hate getting rid of something that does what it was meant to do.  Of course, you risked fingers to open the thing to get it to do its job!

I researched and researched.  We looked at some at Costco.  Then I went to the internet.  G called our hunter/friend/repair person.  I narrowed the search to one I liked.  We decided we didn't want to use a big box store because my daughter, who will make pennies scream before she lets them go, has had problems with delivery AND installation.  I don't want to put up with that.  Those stores used to provide great service - all at once.  Now it is a delivery service and THEN an installation service. She has found on several occasions that when installation gets there, they find damage from delivery.  Then the whole things begins over again.  Nope.  Not for me,

When we got there, we looked at the model I had chosen.  Then he showed me a two drawer model.  Hey - there is only the two of us most of the time.  We could get by with a smaller unit that has the flexibility to get larger - the second drawer.

I have given up fighting the appliance color wars a long time ago.  I have gone through the Harvest Gold, the Avocado - not it's stainless which I think will be around a long time, but it's more expensive.  So we wanted white - which had to be ordered.

The new (what I thought top of the line) machine was delivered on Tuesday.  And installed by the same guy (who has installed my cook top, oven, vent hood).  I loaded it Tuesday night and ran it.  Beautiful.  The dishes were so clean.  I was delighted, and the pain of spending more than I thought was lessened a bit.

Wednesday night we decided we would use BOTH drawers to make sure they worked.  Well they didn't.   The error message then was a leak had been detected.

I called the store.  He gave me the repair number for the maker.  I already felt  neglected by the store.  I called the number.  I also knew that this is an international company, but I really didn't expect a 30 (!!!) minute wait for someone to send someone out.  But they did finally answer, and scheduled me for the next day (Friday).

The service man actually came out early.  I must say he is a great ambassador for the company.  He talked about his experience with these machines, and really praised them.  Of course, he had NEVER seen our problem before - both heating elements are bad,  He was here well over an hour.

The parts (of course) have to be ordered.  So Monday will be the EARLIEST for them.

Right now we are eating as much left overs as we can on disposables to keep dishes at a minimum.  This  morning was an unusual treat (that I love) - we went out for breakfast!

But to me day could be the Labor Day holiday!  And I love it.  Can't understand why people bemoan retiring.  I. Love. It.  It WOULD be nicer if I were younger to enjoy it more!

I hesitate to say that I have "fair to middlin" internet service these days.  The little guy from ATT came out and put us on a sort of back channel where there aren't many others with the hopes of increasing speed.  It is kind of like being at the end of a line where not much of anything gets there.

We had to make a quick (and I mean QUICK) trip to the SSB.  We were finally scheduled for September 4 to get the internet upgraded.  On the second, we got a call right about noon asking if we could be there on the third since there was an installer in the area.  Fortunately it was before 1:00, so we hurriedly threw what we needed for a few days together and left.

We were there until Saturday.  Normally we don't travel at all on Labor Day weekend, but this was important.  Shadow got to stay home, and Clyde was buckled in.  He had his food there awaiting our arrival a day later.

So far that service seems good.  I was on for several hours after the (poor) guy left.  I get 10 Gs a month, and all the time I was on didn't even use 1 G.  Hopefully it will support the mob that will be there Thanksgiving.

I say "poor guy" because we are so far away from his home.  The company is around Waco (general area).  After he left us, he had to go to Abilene.  He left our place after 3.  He must work LONG days.

So perhaps with my servers in place, and the modification to my laptop (paper over the built in mouse) I may be around more.
Posted by Grandma K at 2:11 PM 3 comments: Links to this post