In hospital.  Recuperating.  It was all laparoscopic and from what I can remember - no cancer.

More  later
Posted by Grandma K at 10:30 AM 4 comments: Links to this post

So I am definitely scheduled for Tuesday.  Had my "informed consent" appointment and got the prescriptions for pain after, did all the pre-op, including paying.  Now I just have to be there.

I was hoping this was really outpatient, but I will be kept for 23 hours.  This is going to be cyst draining and removal AND a supracervical hysterectomy.  He is hoping it will all be laparoscopic and so am I.  I don't want (to use the doc's words) to be cut from stem to stern.

So we will see.  And he keeps saying he doesn't believe there is cancer involved.  At most possible pre-cancerous.

I will check in later!
Posted by Grandma K at 5:59 PM 3 comments: Links to this post

Katie will be a Red Fox next year.

They called me this morning because they couldn't contain themselves.  They couldn't wait until they got back.  She got the scholarship and will be attending Marist in the fall.

She sounded gleeful.  I asked how she liked visiting with the professors, and she was quite impressed with the Dean of Chemistry and Biology - her majors.

I didn't have this picture when I posted those from the night of HOCO.  The couple she is standing with is her aunt and uncle (my son and DIL).

She wanted my daughter to dress up for pictures that night, but my daughter is with the booster club, therefore, WORKING the game.  She was not going to "dress-up" since she wouldn't be walking the field to present Katie.

She is in New York as I write this (in fact the entire family went) on her recruiting trip to Marist College.  As it turns out, their plans to tour Manhatten first changed because they want Katie to meet the professors today.  Touring Manhattan - and the 9/11 Memorial was the way they got brother to go on the trip.  And if Reagan isn't happy - no one is happy!  I don't know how this is going to go for the others, but Katie has already stated she wants to be a Red Fox - so I guess this is her future for the next 4-8 years (depending if she still wants to go to Med School or not).


So here are mom and dad 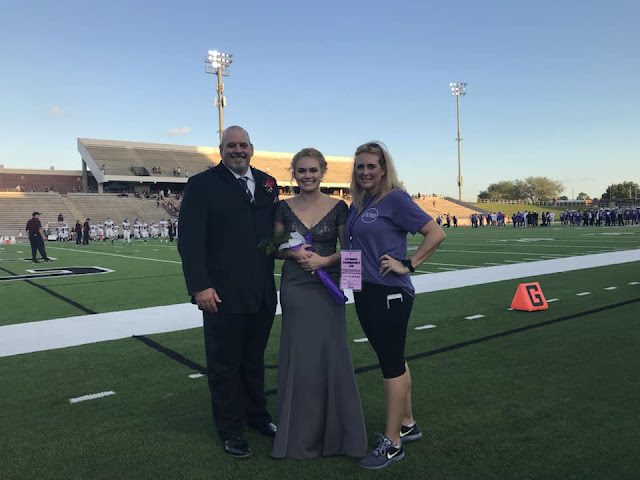 Posted by Grandma K at 9:38 AM 2 comments: Links to this post

So surgery is set for October 30.  That is not going to be a good time for G because he WAS wanting to head to the SSB for opening weekend.  BUT had we not spent a week there this at Columbus Day, I had an appointment with the GYN and this could have been done probably this week.

I am relieved it is set and nervous all at the same time.  But this IS progress.
Posted by Grandma K at 12:24 PM 2 comments: Links to this post

Well, she didn't make HOCO queen.  EVERYONE thought she would.  Obviously the family.  Her friends.  The school faculty.  BUT she talked to be the afternoon of the game.

She told me that three of the girls were sticking to the rules closely.  They were handing out candy and the like for publicity, but one of the girls (one who was barely allowed to run) was using cupcakes to solicit votes.  She would make the kids show their phones (apparently that was the way they could vote - but I don't know) that they had voted for her, then she would give them a cupcake.

This girl also knew she was wrong because after she was crowned at halftime, she took the offense - that she didn't do anything wrong and the other three were cheating too.  You know how that goes - the best defense is a good offense.

Katie was the first one presented on the field.  When they read off all her accomplishments during her high school career - it took a long time.  All the others (boys and girls) had to have their accomplishments read very slowly - everyone noticed that.  She has been academic and athletic All American for three years - she is in three different honor societies.  She is quite a young woman.  And absolutely I am a very biased grandmother, but I also have been around young people all my life as a teacher in secondary school.  She is a great kid!

She has picked up and is looking forward to the swim and water polo seasons.  She is making her college recruiting trips.  This weekend she will be at Marist in New York where they will probably offer her a scholarship.

So this was her before the game 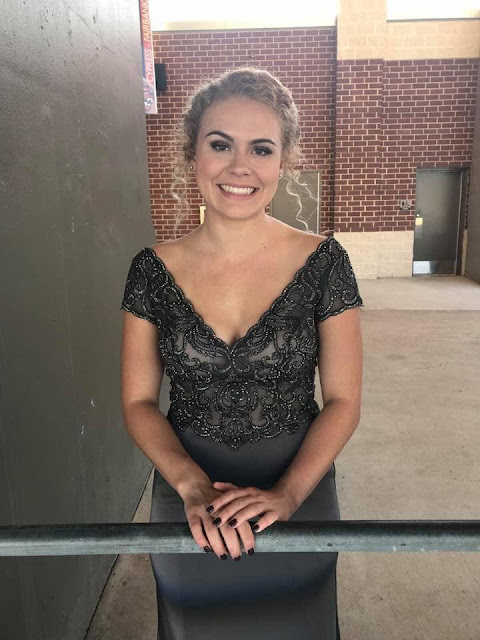 What has been happening

Had my follow up appointment yesterday.  I couldn't sleep Tuesday night.  I tried and tried to put the appointment out of my mind, but that doesn't happen for me.  I am prone to insomnia anyway, and it was present with a vengeance.  I do have Ambien, but I don't want to take it too often so I just suffered.

The second blood test (and Lab Corp STILL hasn't posted that nor the Oncologist) was a bit elevated, but he doesn't believe that it is elevated enough to indicate ovarian cancer.  He still believes this is just a benign fluid-filled cyst. His plan is to laparoscopically drain it - without any of it spilling into the abdomen - and (here I am a little foggy) then do a hysterectomy - again laparoscopically.

I asked why he was going to leave the cervix.  He said it means nothing has to be done vaginally so less risk of infection or other problems like that PLUS no hospital stay and quicker recovery time.

He isn't in a big hurry for the surgery.  I have to contact his surgery coordinator (his wife!) who wasn't in yesterday and may not be in today.  So I will make sure I make contact with her next week.  I got to thinking that while this thing has been there a while, it IS affecting my kidney, so it really needs to be done soon.

He DID say that if any cancer is found, then I would have to be referred to a gynecological oncologist surgeon.  But he doesn't think that will happen.


Yesterday was the high school homecoming parade.  We are a small little town surrounded by the big Houston.  That was so apparent yesterday.  My children went to this high school and were in the hoco parade.  Now my granddaughter was in the parade, again, but this time as part of the Homecoming Queen court.  We will know if she wins Friday night.

As usual, I have to post a picture.  But first, the car belongs to a classmate.  These two have traded barbs for years.  He pushes her buttons!  My daughter and I were afraid this was a terrible hoax on his part, but he really wanted to do this for her.  He was waxing it up to the time the parade began to look its best for her.  Me thinks there is a little hidden passion for her in his heart!  (that's my daughter in the front seat)

Looks like she will be going to college in NEW YORK!  I have always thought of her as a mature "old soul" because of the way she is.  Even as a baby, she seemed ahead of her age.  But now this grandma is thinking "she is just a baby!!"  Oh how I am going to miss this girl.  Since she will be on an athletic scholarship - she won't be home a lot.  Guess I best begin saving what I can to make the trip to New York! 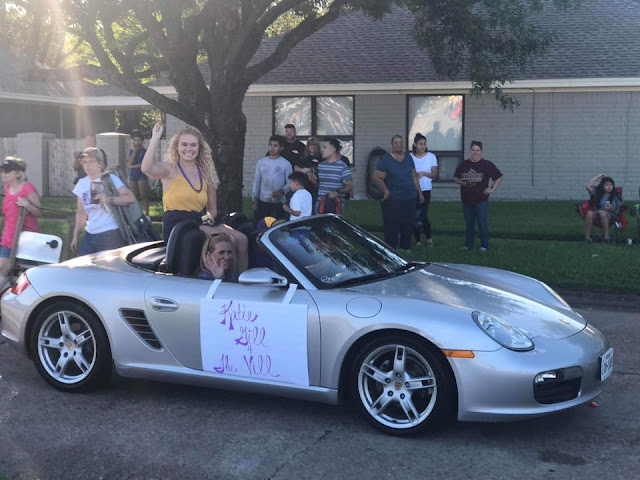 At least half "finally."  After TWO emails, I got the lab results (probably) figured out.  They finally sent a response.  They are faxing the results to the Oncologist (again) and mailing me those results.

BUT even though they say the labs went to the GYN, they are not appearing.  I give.  I see him on Wednesday.  I will find out then.

This bunch makes me wonder.  I was worried when I gave the blood way back there for the Oncologist and I was correct in my worry.  I just am not going to pursue this one any further - at least now.

I waited with baited breath for October 3 to come around.  That was when Lab Corp said my test results from the GYN would be published.

So at 6:03 I opened their web portal.  The doctor's name was there.  But no results visible nor downloadable.

This doesn't look good.  The results of the CA-125 from the oncologist were never published there either.

So now I wait until the 10th when I see the doctor.  I would call, but I just bet the office wouldn't tell me either - so guess I will wait.
Posted by Grandma K at 11:48 AM 3 comments: Links to this post