Another goof - and this time, not mine!

As we all know - there cannot be a single activity that kids are in where there is not a fund raiser anymore.  Schools, band, cheer leading, sports.  They all have them, and often these fund raisers are in addition to fees that the parents pay for the kids to participate even.

And so it is for the year around swimming group to which Lady Bug Senior (have to do that since Son's daughter it Lady Bug or Lainey Bug depending upon which time she is addressed) belongs.  They have to raise money for a swim-a-thon.  Catchy isn't it??

She and her mom (Daughter) spent one Saturday addressing envelopes to send out to beg for money - this was along with all the other competitive swimmers.  Of course, there were prizes.  She had her heart set on a Kindle Fire.

I told Daughter I would wait to pay  donate my money until it was determined just how much more she needed to hit this level of prize.  And I am still waiting.  And she has a prize - an underwater (fitting) MP3 player(??) which I don't believe she thinks much of.

I found this out on Monday when we went to their house for dinner.  So I said I would spend the money that I was going to spend and just buy the Kindle.  Daughter said to wait for her birthday.  Nope - that's in January for Pete's sake.  Then Daughter said LB had enough that she could buy her own Kindle.

That wasn't good for me.  So I came home, opened my good old Amazon account and ordered her Kindle which is to be delivered tomorrow.

Do I spoil this girl?  The simple answer is yes, absolutely.  I try to make sure the others get things too.  I really try to not have a favorite, but she is the oldest.  I have known her the longest, and for that matter I kept her while mom worked the longest.  We do have a history.

So what will I do for the other two in that house.  Well, the  little one I will give the bandanna dress I have almost finished.  I will try to get a picture of it today before it goes.  Monkey Boy is going to be more of a challenge.  But I did promise him a trip to the bookstore right after school is out for the summer.

The remaining three will know nothing of this deal although I did volunteer to make this little lolly pop holders that are T rex.  He has a love of dinosaurs, and his birthday party has been postponed from February to June since he wants a splash party.  Feelings hurt, but OK.  In the picture, there is a starlight mint - not a lolly pop.  I don't have any of those!  And the ribbon is too short - I just used that one for demonstration purposes 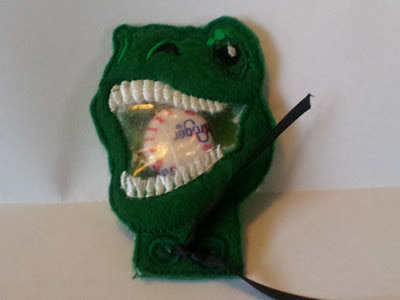 I think you are a fantastic grandma. You individualize the gifts toward the kids interests. That means you take the time to get to know their interests!!!

I would have done the same--ordered the Kindle and had it delivered to her home. Of course, my daughter would have resented that, so.....sometimes you just can't win. It is difficult to be fair and equal to each when there are several children in one family. If you do for one, you have to do for all.