I know I have talked water polo and my granddaughter before.  Well - here I go again!

Water polo isn't a big sport in Texas - but it is growing.  Our players are growing in number and many are being recruited by colleges that are big in the sport.

This weekend was the Regional Tournament to determine seeds for the state tournament.  I thought Katie's team would do well.  Their first game wasn't too big of a threat, but the second should have been the game that would determine number one and number two seeds.  They won.

Then for the finals, they played a school that, while becoming a good team, isn't that much of a threat.  SO they are number one headed to state.  Now if they can beat the Denton, Texas team - they will be the best team in Texas.

As if that wasn't enough to cheer about - Katie was named MVP!  Many have said she is one of the best players in Texas - but this is an honor that somehow always misses her.  I am so proud.

I seldom add pictures - but this time I have to do just that!! 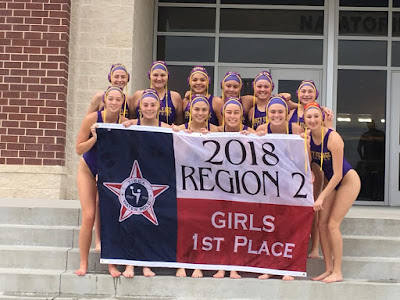 The team - she is the bottom row - second from right

Ah--the proud feeling when a grandkid succeeds! And we are allowed to brag, where we really weren't suppose to with our own kids. LOL