When Katie went to her first JO meeting, I was blown away!  I didn't realize the Texas teams consist of any athlete who is still breathing.  If you are from California, you have to MAKE the team, and the competition is stiff.  But regardless, it is a great event.

They are in San Jose again this year.  The competition alternates between Southern California and Northern California.  So events other than the games will be those around the San Francisco area - like Muir Woods.

This year there is a bit of a change.  Since this is the year of the Olympics, the USA Women Water Polo team played a game there.  They played Russia at the Standford Natatorium.  That was exciting for the JO girls.

Katie had the experience of her young life last night.  SHE got to play in the main pool at Standford.  And they won!!  It is unusual for a Texas team to beat a California team.  Water Polo is just beginning here in any strength.  There it is a way of life! 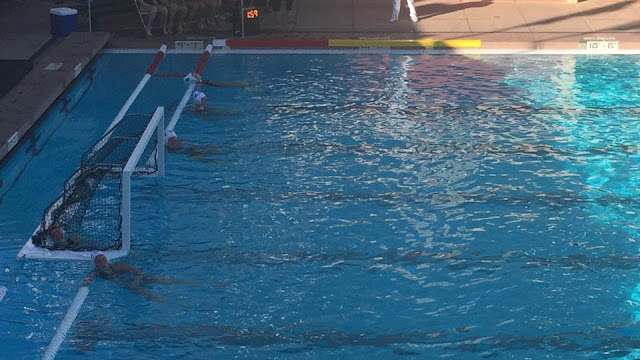 It was an exciting night for grandma too.  A couple of people were live-streaming the game.  It didn't go without a hitch.  My computer kept spooling the feed, and for some reason, the entire fourth quarter didn't come through.  But it was so great watching them.  The Texas (Viper Pigeon) girls played well.  If they had played like this at our state competition I really believe they would be state champs.

So those of us here, it is babysitting one of the dogs.  We have Princess,  the first Boxer rescue I got them.  She is about 11 now and has a condition that affects older large dogs - Boxers in particular.  We lost my Simone to this condition.  It is a nerve disintegration in the spine and they lose control over their back legs.  It ends with the dog not being able to walk.

They were concerned about her being in boarding.  They didn't think she would do well.  Before we got her here, they said she pretty much just laid around.  I was worried about Shadow because she did try to attack some kittens last year.

At first, she didn't move a lot.  THEN she got comfortable.  She does run.  When it's potty time, she is running at full speed!  She will falter a bit, but she is full out.  Shadow had been fine until last night.  He tried to get around the dogs but attracted their attention.  EVEN  CLYDE!  The next days may not go as easily as the previous ones.  She is getting way too comfortable.

But we will see.  Meantime - go Katie!

congratulations and keep it up...Texas is proud of you..